Frail and Broken: Painful Memories of My Son's Circumcision 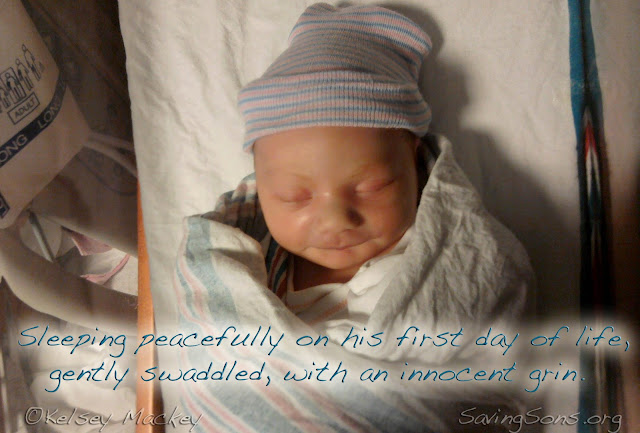 My name is Kelsey. On October 19, 2010, I gave birth to my first child - a boy. He surprised us all with his red hair and his uncanny resemblance to my husband. He was perfect. I was thrilled to be his mother, and I knew it was my duty to do everything I could in my life to benefit him.

October 20, 2010, on day two of his life, less than 48 hours old, the doctor came in to check on me, went down her routine list of questions, and then got to the question of whether or not I wanted to circumcise him. With confidence, I quickly replied, "Yes!" My doctor almost did a double take, and said, "But you know that it is purely for cosmetic reasons, right?" I replied in an annoyed tone, "Thanks, I did my research. I know what I'm doing. Yes, please have it done." She made a mark on her clipboard and prepped for the procedure.

Truth be told, I did not do any research, at least not any REAL research. I maybe jumped into circumcision debates, and found comfort in what the pro-circumcision people were saying, but that's about it. I had no real basis for my belief that circumcision was necessary. It mostly came from whispers around me and seeing circumcised men without a care in the world, never having any problems.

The whispers I heard were such things as, "uncircumcised boys are dirty," "uncircumcised men/boys get ridiculed immensely,"(which was only fueled by me witnessing such childish cruelty in my own schooling), whispers of "it's just something that all boys need done," "its cleaner," "intact penises look disgusting," "if you don't have it done now when they can't remember and don't feel pain, then you almost always have to get it done later, so circumcise him now to save him later..."  All of these whispered myths are those I have found to be completely false, presumptuous propaganda as my wisdom has grown.

Yet at the time, I was solidified in having this done to my son. I sent him off with the nurse who was effectively taking him into the butcher shop. They wheeled him off in his bassinet. About an hour passed, and they wheeled him back in. He was quiet and almost in a sleep like state.

I asked, "So how'd he do in there?" And I'll never forget the response: "Not good. Not good at all. He screamed the whole time." I could see the pain in her OWN face, but because the patient is always right, she was obligated to do this to my son.

He was probably screaming at the top of his tiny, little lungs in agony, writhing around as he was strapped down to the circumstraint. And she had to remove his foreskin with a steady hand and a heavy heart. It was something I knew she did not want to do after nonchalantly trying to talk me out of it to begin with. 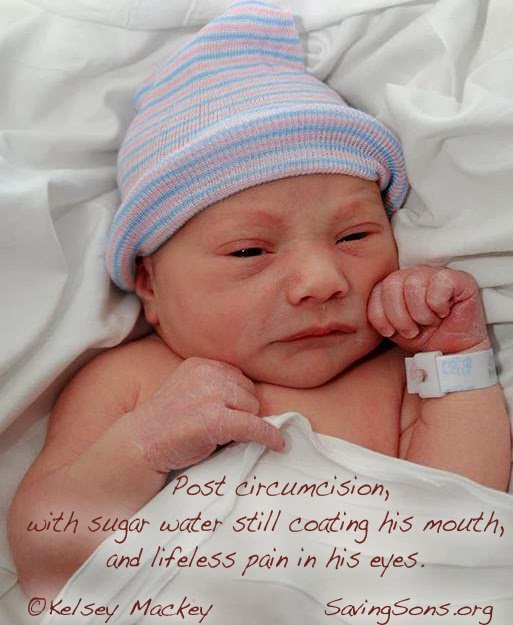 What I saw then, and what I see now, are virtually two different visions. As a new and naive mother, with my newborn son, I saw a tuckered out baby boy after having a "medical procedure" done that was totally necessary in order to keep him healthy and happy. What I see now, looking back, is the horror that is my ultimate wrong decision as a mother - to have a healthy, vital, functional, purposeful part of his genitals cut off in a cruel and unusual way.

As odd as it is, right after they wheeled my son back into my room after circumcision, the photography cart followed them and it was time for newborn pictures. I look at the pictures now and see no life left behind my son's eyes. I see him frail and broken. I see the sugar water still dried around my son's mouth - as if sucking on a sugar coated sponge did his poor self any good while his penis was being sliced, crushed and torn apart. I see the diaper with fresh blood on it, from a behind-the-scenes picture that my husband and I took during the photo shoot. 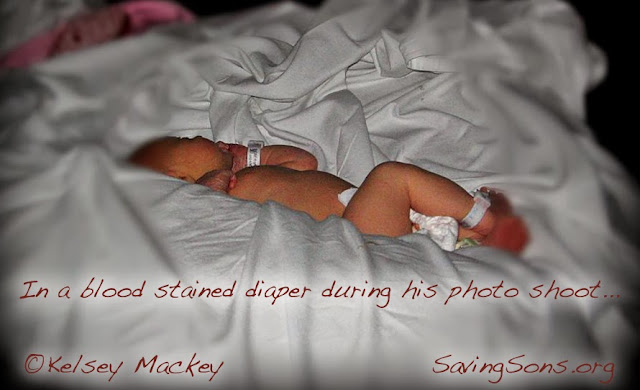 Worst of all, I see the pictures from his first day of life - his first bath, his pure and innocent facial expressions as he slept (top photo). I see the pictures of when he first made his entrance in the world - seeing his miraculous, perfect, intact penis... It is now nothing more than a painful memory for me, full of regret and shame for taking that perfect penis from my son and putting him through so much trauma.

I will forever hold this tremendous guilt and sadness with me, and I will forever be apologizing to my son for the choice I made on him. I will speak out against this cruel and unnecessary procedure, and I will keep any future sons intact.

To all parents: do your research, make the right decision. Don't harm your brand new baby. Don't make the choice that you will one day regret and cannot turn back from. Save yourself the grief, and save your son from all of the trauma, pain and lifelong hardships that come with circumcision. Save your sons. 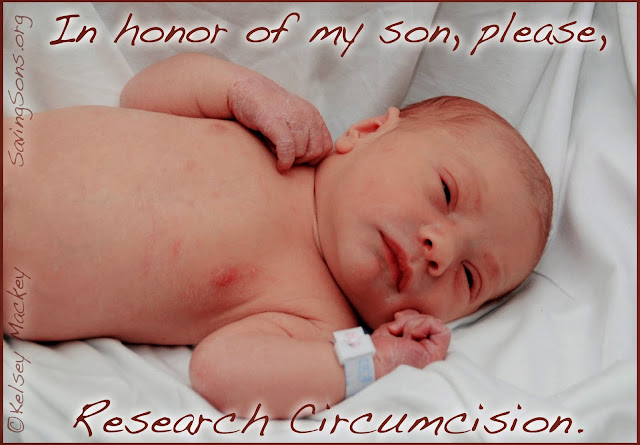 Read more from parents who regret circumcision and are keeping future sons intact.