This observation is one that applies to a fair amount of 'research' that has been twisted to support unnecessary and detrimental genital cutting - especially HIV studies conducted in Africa and the resulting push to circumcise "as a vaccine against AIDS."

A shocking admission by the editor of the world’s most respected medical journal, The Lancet, has been virtually ignored by the mainstream media. Dr. Richard Horton, Editor-in-chief of The Lancet recently published a statement declaring that a shocking amount of published research is unreliable at best, if not completely false, as in, fraudulent.

Horton declared, “Much of the scientific literature, perhaps half, may simply be untrue. Afflicted by studies with small sample sizes, tiny effects, invalid exploratory analyses, and flagrant conflicts of interest, together with an obsession for pursuing fashionable trends of dubious importance, science has taken a turn towards darkness.”

To state the point in other words, Horton states bluntly that major pharmaceutical companies falsify or manipulate tests on the health, safety and effectiveness of their various drugs by taking samples too small to be statistically meaningful or hiring test labs or scientists where the lab or scientist has blatant conflicts of interest such as pleasing the drug company to get further grants. At least half of all such tests are worthless or worse he claims. As the drugs have a major effect on the health of millions of consumers, the manipulation amounts to criminal dereliction and malfeasance.

Horton wrote his shocking comments after attending a symposium on the reproducibility and reliability of biomedical research at the Wellcome Trust in London. He noted the confidentiality or “Chatham House” rules where attendees are forbidden to name names: “’A lot of what is published is incorrect.’ I’m not allowed to say who made this remark because we were asked to observe Chatham House rules. We were also asked not to take photographs of slides.”

Dr. Marcia Angell is a physician and was longtime Editor-in-Chief of the New England Medical Journal (NEMJ), considered to be another one of the most prestigious peer-reviewed medical journals in the world. Angell stated, “It is simply no longer possible to believe much of the clinical research that is published, or to rely on the judgment of trusted physicians or authoritative medical guidelines. I take no pleasure in this conclusion, which I reached slowly and reluctantly over my two decades as an editor of the New England Journal of Medicine.”

Harvey Marcovitch, who has studied and written about the corruption of medical tests and publication in medical journals, writes, “studies showing positive outcomes for a drug or device under consideration are more likely to be published than ‘negative’ studies; editors are partly to blame for this but so are commercial sponsors, whose methodologically well-conducted studies with unfavorable results tended not to see the light of day…”

At the University of British Columbia’s Neural Dynamics Research Group in the Department of Ophthalmology and Visual Sciences, Dr Lucija Tomljenovic obtained documents that showed that, “vaccine manufacturers, pharmaceutical companies, and health authorities have known about multiple dangers associated with vaccines but chose to withhold them from the public. This is scientific fraud, and their complicity suggests that this practice continues to this day.”

Lancet’s Dr. Horton concludes, “Those who have the power to act seem to think somebody else should act first. And every positive action (eg, funding well-powered replications) has a counter-argument (science will become less creative). The good news is that science is beginning to take some of its worst failings very seriously. The bad news is that nobody is ready to take the first step to clean up the system.

Corruption of the medical industry worldwide is a huge issue, perhaps more dangerous than the threat of all wars combined. Do we have such hypnosis and blind faith in our doctors simply because of their white coats that we believe they are infallible? And, in turn, do they have such blind faith in the medical journals recommending a given new wonder medicine or vaccine that they rush to give the drugs or vaccines without considering these deeper issues?

F. William Engdahl is strategic risk consultant and lecturer, he holds a degree in politics from Princeton University and is a best-selling author on oil and geopolitics, exclusively for the online magazine “New Eastern Outlook.”
No comments: 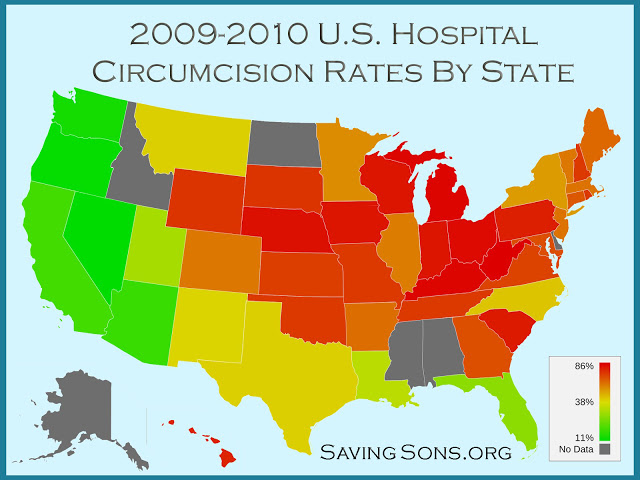 The above map, created by Jonathon Conte of the Bay Area Intactivists, and Danelle Day, of Saving Our Sons, depicts the varying rates of infant circumcision state-by-state in the U.S. today. Rates are from 2009-2010 hospital statistics obtained at MGMBill.org, where readers can find references to original statistic sources.

Medicaid continues to use tax dollars to fund unnecessary infant circumcision in the majority of states each year. If you live in a Medicaid-funded state, please get involved in letter-writing efforts to encourage Medicaid to stop channeling money into this destructive practice. No matter your location, we encourage you to get involved in local awareness-raising efforts in whatever manner fits your personal style. Speak up and connect with others doing the same.