In 2006, Paul Tinari was granted $12,000 by the government of British Columbia to have foreskin restoration surgery. When he was eight years old and boarded at a church-run school in Montreal, Paul was forcefully held down on a desk and circumcised, because a priest had reason to believe Paul had—God forbid—masturbated.

Paul is Métis, and his story is another seriously disturbing instance of church abuse in the era of residential schools. Paul claims the practice was routine, and could have happened to thousands of young First Nations boys trapped in the system—though that is impossible to confirm, especially given the Canadian government’s lack of transparency regarding the residential schools issue. We talked to Paul over the phone about what he went through, why it may have occurred, and his outspoken opinions in support of the intactivist movement.

Can you tell me what happened to you?

Sure. My mother was widowed very young, so she put me into this boarding school in Outremont, in Montreal. It was run by the church. It was actually a convent, but the priests had access to it. Now it turns out, I read many years later, that one of the nuns made a formal complaint she was getting regularly raped by the priests. So when I heard that story, I decided to come forward with my story that I’d kept hidden for all these years. That was the impetus that got me to go public with my story.

Your circumcision took place in Montreal?

You were only eight years old?

I was about eight, yes. I didn’t know anything about masturbating. I was totally innocent. Anyway, so late, late one night—we slept in a big dormitory with all the other boys—the priest came in and really roughly pulled me out of bed. He brought me down the stairs, he brought me down the hall, and he brought me to this room where there was this bearded guy. I didn’t know what was going on. It took me a long time to figure out what role these people played. It turns out that the guy with the beard who was wearing a beanie and a black suit was a mohel, a Jewish circumciser.

They pulled my pajamas down and then tried to pin me down to the desk, but of course it’s easier to do that to a baby than an eight year old. I fought back. I kicked one of the priests who was holding me down in the nose, and their response to that was to actually break my arm and break my nose. So I had a broken arm and a broken nose—which I still have to this day. He pinned me down, the guy put a clamp on my penis, and they performed the circumcision right there on the desk with no anaesthetic, no disinfectant, no nothing.

So as a result of this I had very serious infections for many, many weeks and months afterwards. Matter of fact, I had a chronic infection for the rest of my life until I had corrective surgery. He took so much skin off that I wasn’t able to have an erection without great pain.

Yeah. It was horrible. That’s how I went through my life until my 40s, when I had corrective surgery. I’m one of the few people who’s qualified to speak to what’s it like to be intact, then circumcised, then intact again. For any man who’s circumcised and says there’s no difference, he doesn’t know what the hell he’s talking about. Since I’ve had restoration surgery my sex life has improved 1,000 percent. There’s no comparison. It’s like going from black and white vision to color vision.


The Catholic Church—in Montreal in particular—has a history of withholding documents, pertaining to their role in the residential school system, from the Truth and Reconcilliation Commission. Do you think this kind of punishment was being done on a broader scale? You must not have been the only one.

I was told that if I told anybody or if I talked to any of those boys that I would go to hell, and in those days I believed that. But I do believe that several of the other boys were treated the same way even though we never discussed it among ourselves. We were in fear. I don’t know if you know what it’s like to live in total fear every day.

And the people who did this to you, do you think they believed in the religiosity of it? Did they think they were really doing God’s good work, or was this based in something more sadistic?

What you have to do is go back to the Middle Ages and look at the witch burnings. It’s hard for us in our present, modern world to get into the mindset that existed at that time, but you have to realize that the witch burnings were not an act of hate. They were an act of love. The compassion for the person, because they considered the body the mortal flesh to be disposable, and all that mattered was saving a person’s soul.

So if these guys thought they were doing right—the priest and the mohel—do you think they should be held criminally responsible?

Of course. Regardless of their religious beliefs. I was an underage minor, and my mother never gave consent, and I didn’t give consent. So today, we teach kids to say no to adults who are touching them inappropriately, right? Well, I said no, and no one listened.


Can you get into the industry of circumcision a bit?


Do you have any idea if he was circumcised?

No idea. He probably circumcised himself. The guy was crazy enough to do that. So anyway, the industry grew up and discovered that foreskin is highly useful stuff. There’s a multi-billion dollar industry driving continued circumcision.

What kind of products are we talking about? It’s blowing my mind that there’s a commercial market for foreskin.

Foreskin obtained from circumcisions are used by biochemical and anatomical researchers to study skin. It’s used to make skin for burn patients, for skin grafts. It’s used for anti-aging skin cream. It goes on and on. There’s one doctor in Vancouver who boasts about having performed over 35,000 circumcisions and he’s charging about $200-$400 at a time [it can be up to $1,000 in Ontario]. Do the math about how much he’s earned. He’s earned millions. 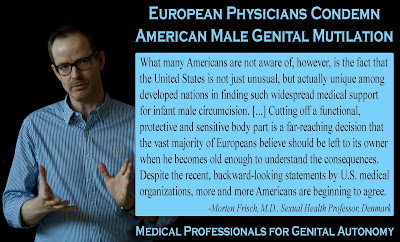 This past April, Vancouver resident Dr. Paul Tinari became the first Canadian man to have a heath-care-funded foreskin restoration. When he was eight years old, doctors at his school performed an operation without his consent. After years of painful erections, and frequent infections, Dr. Tinari -- with the support of his doctor and psychiatrist -- successfully sued, and as a result, the B.C. Ministry of Health paid for 90 per cent of the $12,000 operation.

North America has the highest rates in the world for this procedure, but currently, no regional, national or international medical body in the western world advocates its practice. In fact, many, like the College of Physicians and Surgeons of B.C., recommend against it. Historically, many doctors performed circumcision believing there were psychological and medical benefits, but pro-intact advocates say that since these medical benefits have now been disproved, the issue is one of cruelty. Dr. Tinari says his intention is to rectify what he sees as “human rights abuse” and a “gross violation” of a small child’s body.

Effectiveness of Anesthesia for Circumcision Pain

The Circumcision Secret: My Experience (Man from Wisconsin speaks)