Extreme Ballooning in the Intact Child 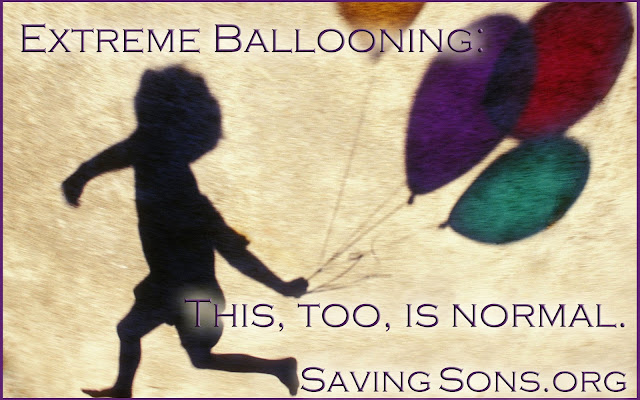 When our son, Andrew, was approximately 12 months, he had such an extreme urinary tract infection that his urine became sort of like sludge. It would ooze out when he urinated, and appeared gritty. Our family doctor cleared it up with antibiotics, but after that experience his urine started becoming trapped inside of his foreskin after urination. The opening of the foreskin would be squeezed shut, and only a drop or two would exit. I don't know if this was related to the UTI in some way, but it only began after this time. I worried a lot because it seemed the entire contents of his bladder would be inside the foreskin, and I thought that maybe the urine would be forced back up the urethra, perhaps causing damage to the urinary tract, or result in more UTIs. This amount of urine would cause his foreskin to swell to the size of half a lemon (which is pretty big on a tiny little boy). THAT is what I considered outside of normal ballooning. My older son's foreskin (at age 5) also balloons when he urinates, but no where near this much.

I spent a lot of time on the internet searching for things like "trapped urine," "foreskin ballooning," and "small foreskin opening," but really wasn't able to find a lot of information outside of the diagnosis of phimosis. At such a young age, real phimosis is almost unheard of, though many U.S. physicians misdiagnose it in children because they are not well informed on normal male (intact) anatomy.

Everything I read online made it sound like what my son was experiencing was way outside of a normal range, and my concerns grew. By the time Andrew turned two, our family physician thought perhaps someone else should take a look. She didn't know what to do, and while she is intact-friendly, she unfortunately doesn't see many intact boys in our part of the state. She referred us to MSU Pediatric Urology where we saw Dr. Bartkowski. The first recommendation from him was to circumcise. I told him I wanted to avoid that, and that we should try anything less invasive first. He thought about it for a while and decided on a course of steroid cream, hoping to widen the prepuce. We used that for three weeks. The extreme ballooning was still happening, so we scheduled a follow up appointment. Dr. Bartkowski very reluctantly said to try for another three weeks, but told us using it any longer would "make Andrew's foreskin grow too big" and then we would be told to circumcise for that reason. If the second course of cream didn't fix the problem, then he again suggested circumcision.

We used the cream for three more weeks and still had the issue, so I just did not call or go back to Dr. Bartkowski. We started seeing the issue arise less and less, but Andrew became interested in potty learning and the ballooning was causing a problem because he would become frustrated that nothing was coming out, so I started searching for another physician.

There were several local intact-friendly pediatricians, but none of them would take us on a consult, and we did not wish to switch providers permanently. I had heard that University of Michigan Pediatric Urology was good, but they wouldn't take our insurance. Several months of calling around yielded nothing but frustration on my part. Then I heard about Dr. Van Howe, and that he was moving to Saginaw from Michigan's Upper Penninsula. This placed him within a two hour drive for me instead of eight or more hours.

When I called in his new office in August, his practice wasn't set up yet and they thought he might start taking patients in September, but the staff did not have a lot of information. I called again in September and his staff confirmed that they would take our insurance but they were not sure if they could take us as a consult. I had to call several more times and explain our full situation each time before I finally got an answer. I convinced them to see us in the beginning of January, and got our referral straightened out with our local family doctor.

Amazingly, none of his staff that I talked to knew that Dr. Van Howe was such a big name in the genital autonomy field and that he would know so much about the intact male body. But this was our golden ticket and I was determined to see him. We saw Dr. Van Howe on January 10th and he was so kind and patient. I explained Andrew's whole history and my concerns. He said that even this extreme amount of ballooning is normal - in fact, it is good because it demonstrates that everything is still nice and elastic as it should be. In some very rare cases, the prepuce tissue becomes hardened, like a callous, and is unable to expand.

He did an exam on our son and said that the opening of the prepuce is a good size, but that we could try to encourage it to open up a little more with another course of steroid cream. He suggested using this for 6-8 weeks straight. He was confident that the cream would resolve the issue, if time alone did not. If the cream (and time) still did not work and we continued to be concerned, we could attempt surgical correction in a procedure that makes three very small incisions, like pie wedges, then rotates the cuts to make one bigger opening in the prepuce. It is a common surgery in Europe (where virtually all boys and men are intact), but only about six physicians in the United States know how to perform the procedure. It would have to be done by a pediatric urologist who can do plastic surgery, and the closest one is in Boston (that he knew of). However, he did think that Andrew's situation is very normal, and that having the surgery would be extreme.

Finally, after all this time, my nerves are at rest. Andrew is normal, and I think the cream and time will do its work. I'm once again a happy mother. 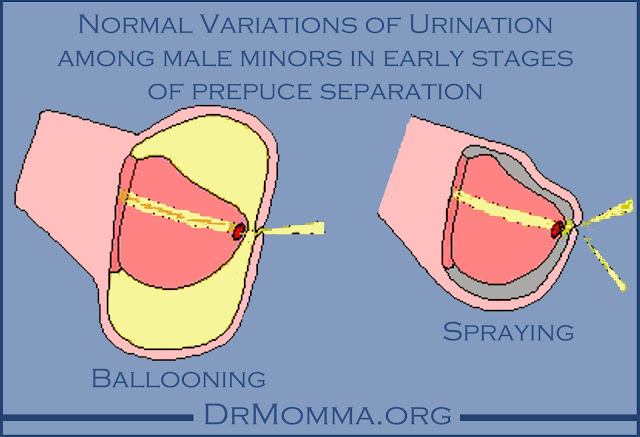 Find further information pertaining to intact care at the Intact Care Resource Page or by clicking the tab at the top of Saving Our Sons: http://www.drmomma.org/2009/06/how-to-care-for-intact-penis-protect.html