Why can’t you just mind your own business (on circumcision)?


“Why can’t you just mind your own business?”

Are you kidding? That’s the main reason I’m an intactivist in the first place. Males are generally much happier and healthier when they’re empowered, encouraged and informed on how to make their own personal healthcare choices. The exact same thing can be said about females, and it applies to all age groups, across all genders.

If you’re asking me, “Why can’t you stop bashing circumcision?” The answer is simple, because circumcision advocates have forced my hand in numerous ways:

1. I’m sick and tired of misinformation peddled by news and entertainment media that depicts or describes intact penises as dangerous, ugly, and uncivilized in such a way that it actively shames boys and men who aren’t cut. It has led to all manner of bullying, sexual harassment and humiliation when the guilty party has no idea what the foreskin even is in the first place.


2. I’m sick and tired of healthcare workers bullying parents to circumcise after they already said no, or even the parents who only want more time to think carefully and make a decision. Forget about the circumcision controversy for a second... It is absolutely unethical and completely unprofessional for doctors and nurses to put pressure on the parents to make a choice. It’s even worse for the mom after she just gave birth, is still in pain and is not thinking clearly like normal.


3. I’m sick and tired of these same healthcare workers who will prematurely attempt to retract the foreskin after being explicitly instructed by informed parents not to do so and the results can be devastating in some cases. The forced retraction epidemic is so bad that even the American Academy of Pediatrics had to issue intact care instructions, but clearly not all doctors got the memo. Both circumcision and forced retraction are iatrogenic injuries; the “experts” responsible need to be held to account for improper care.


4. I’m sick and tired of sex education curriculums around this country failing to accurately inform our young people about many things regarding sex, even the most basic facts about sexual anatomy and physiology. Children and teens are going to make mistakes as they grow up, but most of them aren’t stupid. More and more, they’re starting to realize that circumcision really is a completely obsolete hygiene measure and they’re gradually rejecting the practice altogether.

5. I’m sick and tired of the pseudoscience being put out by circumcision advocates. The foreskin is not a disease or a defect. There is no guarantee that circumcision will protect males from any known pathogenic microorganism. Essentially every health problem pertaining to the foreskin or the intact penis as a whole can be prevented/treated by evidence-based medicine/health practice and without circumcision. 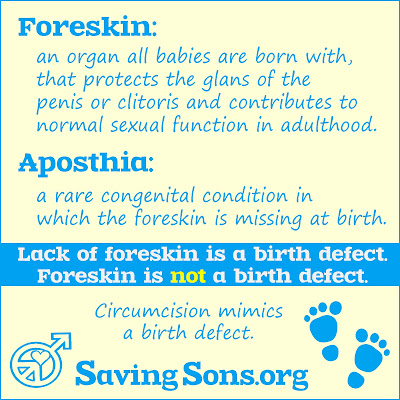 Circumcision always results in at least some measure of damage to the penis regardless of the technique or intent of the circumciser. No man should ever have to spend years of his life tugging on his penis to get back something should never have been removed to begin with, thankfully foreskin restoration is known to deliver effective results.

Admittedly, circumcision proponents have also made me literally laugh out loud many times over the years by saying the most ridiculous things one could imagine as a token of their ignorance:

“He’ll have trouble putting on condoms.”

“He’ll never have any children.”

“He can’t even go to the bathroom.”

By this point however, such rhetoric has long since outlived its amusement and now we’ve had enough. We will never remain silent until this horrible injustice has been eradicated from the world forever, along with all other forms of human genital mutilation.