Tiffany's Story: Circumcision and its Impact on My Son 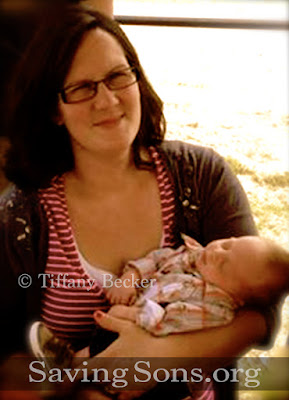 I am a regret mom.

I allowed my doctor to torture my son so that he could make a profit, and I will never forgive myself.

I 'researched' circumcision when I was pregnant. I saw the claims that it was cleaner, prevented urinary tract infections (UTIs) and cancer, and I believed them. I thought, "I don't know any men who are intact. I don't know any men that get UTIs or have penile cancer, so this must work. And doctors take an oath to do no harm so if my doctor is this adamant that it's necessary, it must be..."

My mom has been a nurse for 40 years and has assisted on dozens of circumcision surgeries. She says it's necessary and isn't so bad. My husband wants to prevent cancer/UTIs and doesn't want our son teased in the locker room. My babysitter wouldn't watch him if he was intact because she's heard it's 'dirty,' and there are zero other daycare openings for newborns in our area.

My gut said no but everyone and everything else said yes.

My son was born and we had to stay more than 24 hours because he was born at 10 pm. When he was almost 24 hours old my husband asked when they would circumcise him, and they said not until right before we were discharged. I asked why. No one gave me an answer and my stomach churned.

The next day as they were preparing our discharge paperwork, my doctor came to get my son. I felt panic and looked around the room to tell my husband I couldn't do it, but he was gone to eat lunch.

My doctor told me again how necessary it was to do, and I reluctantly let him take my son away.

When he was brought back he was an entirely different baby. The light in his eyes was gone. 15 minutes later they came in to say that they forgot to weigh him while he was naked so I needed to undress him and remove his diaper so they could weigh him now. I did and the gauze came off, too. It was a horrific sight. His penis was purple, swollen, raw and bleeding. It was bleeding so much. I was already crying and at that point it turned into sobbing. I was devastated at what I had allowed them to do to my baby.

He was screaming an awful, distressed scream. In fact, the word 'scream' doesn't even describe the noise coming out of my son's mouth. It was a sound of pure agony.

The nurse said all the blood was normal. I asked what I could do to help him and she said nothing. NOTHING! This was insanity. Horror. Surely I was just having a nightmare. I am a good mom. I am a crunchy, gentle attachment parent. I breastfeed, I don't allow my children to cry unnecessarily. I protect my children. I spend every moment possible with my children. I put them before my needs. Always. Surely I couldn't have signed papers and let them do this to my baby.

His sleep was restless and broken.

They sent us home with my son in shock and distress and told us we could do nothing to help him. 18 hours later he still wasn't breastfeeding. He hadn't peed or pooped, and he was now so jaundiced. We ended up in the emergency room. The nurse looked at me like I was crazy, said he was fine and asked, "Do you really want me to call the doctor in for this?"

My newborn baby hadn't eaten, peed or pooped in 18 hours and she acted like I was crazy for being so concerned. I was shocked and disgusted. I knew we had made the wrong decision and nobody would help my child.

A few weeks later the daycare lady who had told me she wouldn't watch an intact baby boy called me to say she was closing her daycare.

A year later I found out that nursing school had not taught my mom, a practicing nurse for 40 years, anything about the intact penis and its care. She had no idea that the foreskin was fused to the head of the penis at birth. I had to find reputable resources just for her to believe me.

Then I found Saving Our Sons and my world came crashing down.

I found that the reasons my doctor and husband said I needed to circumcise my son were all lies.

How had I let this happen? How was I bullied into not protecting my brand new son? Everything I knew, except my gut, said this was the right thing to do -- and I found out that every last shred of that information was wrong.

Fast forwarding to a few days ago:  I ripped a TINY piece of my nail off the nail bed. It is raw, swollen and so, so excruciating every time the tiniest thing touches it. The foreskin is fused to the glans (head) of the penis the same way my fingernail was fused to my finger. This pain is a tiny fraction of what my son experienced. I bumped my finger on the corner of the counter and nearly blacked out. Yet I was instructed to pull the remaining skin back from my son's circumcised penis and scrub poop and urine off his raw wound. Oh. My. God. I nearly can't handle this pain and it doesn't begin to compare to what my brand new baby experienced.

HOW DID I LET THAT HAPPEN TO HIM?!

I signed the papers and handed him over. I  know I can't take this back. I will feel guilty for the rest of my life. Hands down, this was the worst mistake I have made as a parent. This will never happen to another of my children, and I hope I can help prevent it from happening to other children. 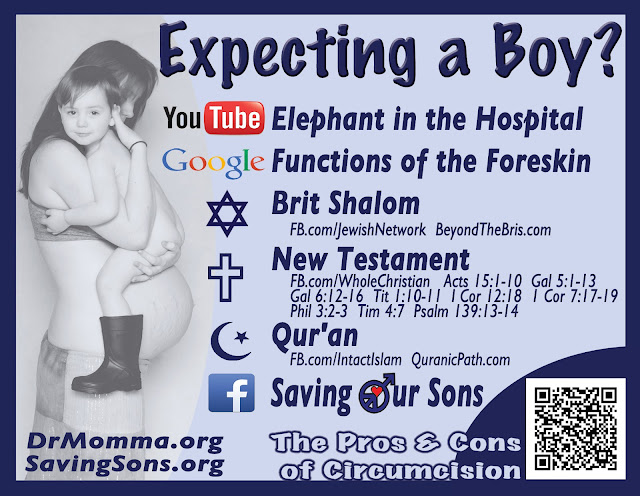 Read more from parents who circumcised their son and will be keeping future sons intact: Drmomma.org/2010/05/i-circumcised-my-son-healing-from.html

If you'd like to get materials into the hands of your friends/family, but don't feel comfortable doing so yourself, we will mail a small anonymous Expecting Pack filled with information directly to them, and connect them with local leaders who can further answer questions or dialog. You may also include a personalized note if you wish. Find details at: Savingsons.org/p/info-pack.html There are also breastfeeding packs with intact information for mothers who plan to nurse their babies; and full info packs to use as lending resources with clients (or those who'd watch videos and read full articles).