Artwork by Shaky Leone. Find more from Leone at: Earthempress.com/products

My son was born perfect. I was 20 years old, and I asked my mom about circumcision. She said, matter of factly, "Everyone does it." The next day nurses took my son to be circumcised, and he was gone much longer than I expected.

When he came back, I could tell that something was very wrong. He had burst blood vessels on his face from screaming. I held him and cried. I went to change his diaper, and it was soaked in blood. I was terrified. I called the nurse back into the room, and she nonchalantly told me that he "was a bleeder" and they'd had to cauterize his penis for it to stop.

I held him again and cried -- immediately regretting my decision.

The healing process was hard. At times it looked like the head of his penis was going to fall off of his body. It was the color of liver. A nurse friend told me honestly, "I have never seen anything like that in my life."

Once he was 15 months old, I knew his body had not healed 'correctly.' There was an abundance of loose skin around the shaft, directly under the glans (head). I took him to a pediatrician who referred us to a pediatric urologist at children's hospital. The urologist scheduled a 'simple revision' surgery for the following month. He said my son would have 6 stitches and the healing would be easy.

Fast forward to the surgery: I was called back to a little room that had two chairs and a box of tissues sitting on a table. I was petrified. Luckily my son was stable, but the revision turned into a complete penile reconstruction.

They initially planned to remove the loose skin around the glans only. However, the previous circumcision was botched so badly that at the base of my son's penis, his remaining skin was far too tight. Because of this, doctors had to graft the skin from the glans/shaft of the penis onto the base. My 16 month old ended up with 40+ stitches in his penis by the end of surgery. The base of his penis split during the process, and had to heal from the inside out. The cost of this surgery ended up being approximately $11,000. All this money to repair a botched surgery that was unnecessary from the beginning.

In our photo below, we were laying in the bed during his recovery. They wanted us gone within an hour, but I demanded to stay in a private room until I could get him to calm down. He is 7 years old now, and very much has Asperger's syndrome. I have tried to ask if he has any sensation in his penis, but he doesn't really understand the question...

As a regret parent myself, I'm begging readers to research the benefits of keeping your son intact. 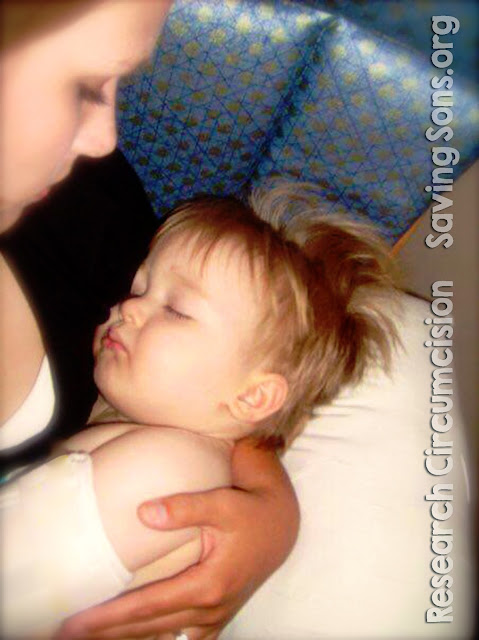 Additional stories from parents whose sons were circumcised: DrMomma.org/2010/05/i-circumcised-my-son-healing-from.html