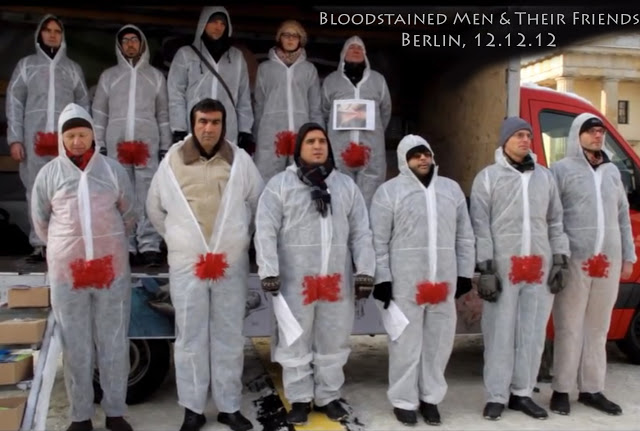 A group of German men, circumcised against their will at birth, along with several of their supportive intact friends, spent 12/12/12 demonstrating against the recent German ruling that legalizes the forced genital cutting of healthy baby boys. Dressed in white "bloodstained" jumpsuits at Brandenburg Gate, the men each turned, one by one, to face the audience as the cries of yet another baby being circumcised played over airwaves. Several of the men participating also spoke publicly at the event. Listening to each new scream of circumcision, as each man turns to face us, is a horrific, yet brutally powerful display of the realities of genital cutting in the 21st century.

Circumcision in Germany is rare except among babies born to Jewish and Muslim parents. The Children's Rights Campaign Against Forced Circumcision (Kinderrechtskampagne gegen Zwangsbeschneidung), one of the leading groups with this performance, reiterates Jewish filmmaker, Victor Schonfeld's, position: Jewish parents are under extreme social pressure to conform. They cannot resist this pressure alone. The main issue with the current debate in Germany is not a 'lack of love' or a failure to want the best for boys and men, but rather is due in great part to the lack of public education on the many consequences of circumcision, the risks involved, and this ill-informed social pressure. The Children's Rights Campaign and others hope to raise awareness and improve education toward this goal. The group formed after Baby Angelo bled to death following circumcision earlier this year.


For further information about this protest and action in Germany, visit: www.pro-kinderrechte.de

"My Body Belongs to Me!"