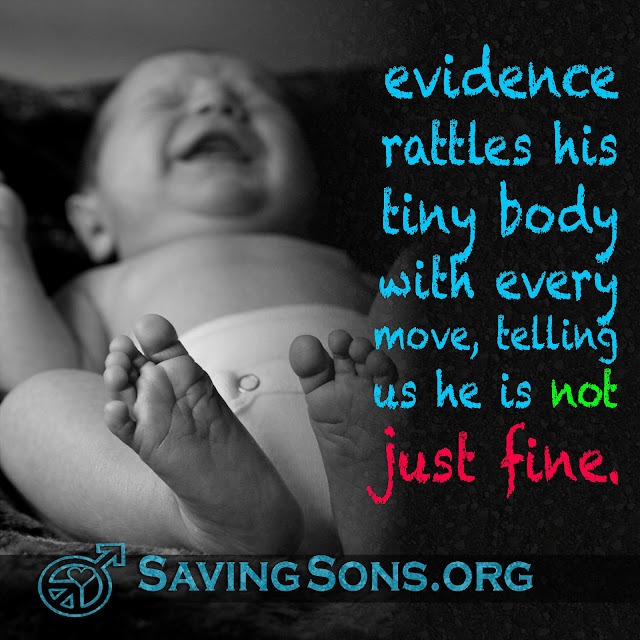 Dear every person who says 'he was cut and he is just fine,'

-When he was a days old newborn, craving the warmth and smell of his mommy, taken and strapped arm and leg to a cold plastic board, no, he wasn't fine. He was afraid.

-While he lay there, strapped firmly in place, unable to see or hear or feel the safety of his mommy, when his whimpers and cries did not bring her, he wasn't fine. He was alone.

-When the cold metal probe was forced into the membrane between his penis and foreskin, he wasn't fine. He felt every rip and tear.

-When the physician used a scalpel and clamp to cut his sensitive genitals without adequate pain relief of any kind, he wasn't fine. He was in excruciating pain.

-When he was screaming and choking, gasping for air while feeling his genitals ripped, clamped, and cut from his body, he wasn't fine. He had a sugar coated binky shoved in his mouth to stifle his cries.

-When his tiny little body could not handle the pain anymore and went into shock, his screams silenced, but he wasn't fine. He was broken.

-When he was handed back to his beloved mommy, but could still feel the excruciating pain of a fresh open wound on his delicate genitals, bathed in urine with every wet diaper, caked in feces with every bowel movement, he wasn't fine. He was in pain, with no way to know why.

-When he was hungry, but hurting so much that he couldn't bring himself to eat, he wasn't fine. He was suffering.

-When his hungry, painful little body could take no more, he fell asleep, but he wasn't fine. He was depleted.

-With every diaper change, the air hurt his extremely sensitive glans without the protection of his foreskin. He cried, he wasn't fine. He spent months in constant pain.

-When every erection as a small child brought him more pain, with the tightening of scar tissue and the stretching of not enough skin, he wasn't fine. Normal things became painful experiences.

-When he begins having sex, and has no idea of the feelings robbed from him, he isn't fine, he is experiencing a beautiful event in black and white.

-When he finds out he is having a son, and insists his baby be forced to undergo the same cruel experience because 'he had it done and is just fine,' he isn't fine. He is confused, defensive, and in denial. He is angry because how dare anyone tell him that his penis isn't normal! He is angry because he cannot bear to think of himself as damaged. He is angry because his lifelong 'normal' is in question. So he repeats the cycle of pain with a new generation, because pride is too big a pill to swallow, and being different is a terrifying thing. No, he isn't fine. Break the cycle, protect their tiny little bodies. ♂ 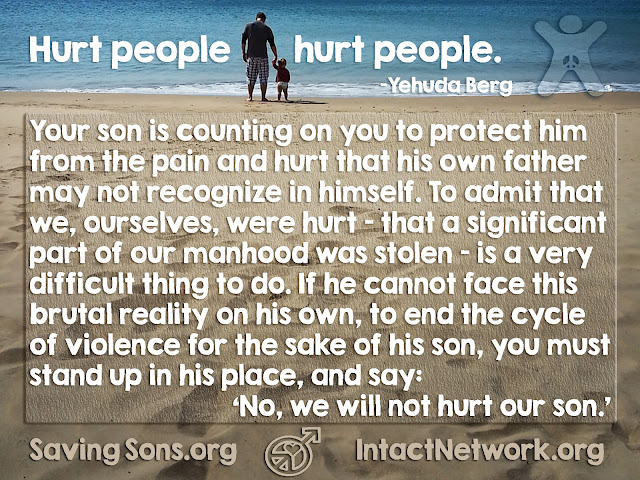 For additional information see: Should I Circumcise My Son? The Pros and Cons