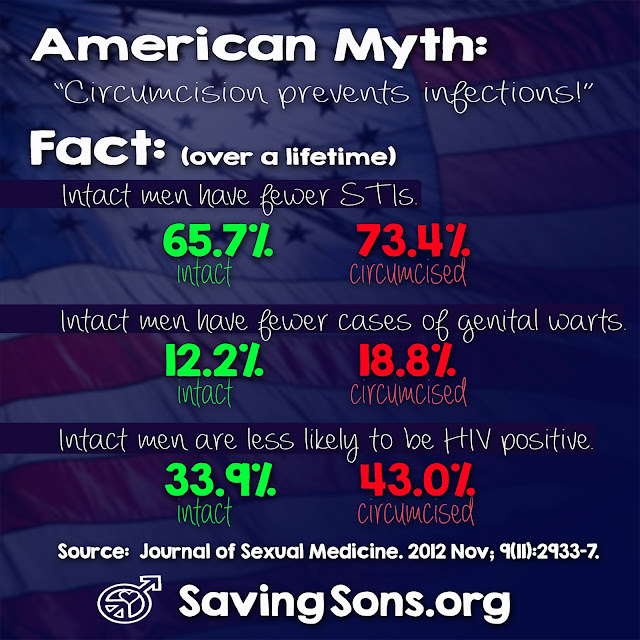 A common myth heard in North America is that "circumcision will prevent sexually transmitted infections (STIs)." However research time and again demonstrates otherwise.

A study published in the Journal of Sexual Medicine reports that over a lifetime, intact men have fewer STIs, fewer cases of genital warts, and are less likely to contract HIV.

Introduction
Circumcision among adult men has been widely promoted as a strategy to reduce human immunodeficiency virus (HIV) transmission risk. However, much of the available data derive from studies conducted in Africa, and there is as yet little research in the Caribbean region where sexual transmission is also a primary contributor to rapidly escalating HIV incidence.

Aim
In an effort to fill the void of data from the Caribbean, the objective of this article is to compare history of sexually transmitted infections (STI) and HIV diagnosis in relation to circumcision status in a clinic‐based sample of men in Puerto Rico.

Methods
Data derive from an ongoing epidemiological study being conducted in a large STI/HIV prevention and treatment center in San Juan in which 660 men were randomly selected from the clinic's waiting room.

Conclusions
These analyses represent the first assessment of the association between circumcision and STI/HIV among men in the Caribbean. While preliminary, the data indicate that in and of itself, circumcision did not confer significant protective benefit against STI/HIV infection. Findings suggest the need to apply caution in the use of circumcision as an HIV prevention strategy, particularly in settings where more effective combinations of interventions have yet to be fully implemented.