By Chris of The Man-Nurse Diaries 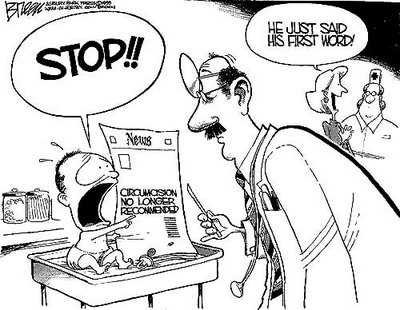 Before having my first son, we were presented with the decision (at least in the United States) of whether or not to circumcise him. While we were initially assuming we would, we did some research. We began finding that not only is male infant circumcision almost never medically necessary, but it's not even performed in most of the developed world. The majority of European countries never began circumcising in the first place. The United Kingdom doesn't pay for it; it's an out-of-pocket expense. The United States is the only secular country that routinely circumcises males.

I can personally attest to this now, because I worked for six years as a certified nurse aide prior to becoming an RN. I worked with countless intact men, mostly European immigrants in Chicago: Poles, Serbs, Lithuanians, etc. Younger men and older men. Men who could walk to the bathroom, and men who constantly soiled themselves. Men who had indwelling Foley catheters and men who didn't. Men who were impeccably clean, and men who were homeless. Men who were healthy, and men who were critically ill and severely immunocompromised.

Never once did I encounter an adult male patient who had ever had a medical problem due to being intact.

Not only that, but during the cleaning of patients, I only ever worked with two nurses (that I remember) who would actually go through the rigmarole of retracting the foreskin, cleaning the glans, and replacing the foreskin. That's what we were taught in CNA and nursing school, but almost everyone would leave it alone. I suspect most people who work with a high intact population do the same. If it never presents a problem, it's always clean, and you're just causing discomfort, why do it?

In fact, female patients are far more prone to fungal and bacterial genitourinary infections than male patients are—yeast infections, urinary tract infections, abscesses, etc. And we know that this is largely due not only to their shorter urethra, but also to their labial folds—their "excess" skin. Why don't we cut that off? Why isn't female circumcision considered for infection prophylaxis? That's how we think of male circumcision. Except the reality is that, as with male patients, the 'benefit' of circumcision would be negligible, because the number of serious complications with women staying 'uncircumcised' is extremely minor.

So as it stands, we have two sons who are intact. One is almost five years old and the other is nearly three. They've never had a problem. During diapering they required less care and bother than our daughters did. And now, during bathing, we don't retract or mess with their prepuce (foreskin).

I suspect that someday they'll be like my patients were: ninety years old and intact—with no regrets.

Chris is the father of four (intact) children, 2 daughters, 2 sons. His career as an RN has taken him to the intensive care unit at one of the largest urban trauma centers in the Midwest (United States). More of his chronicles as an RN can be read at The Man-Nurse Diaries.